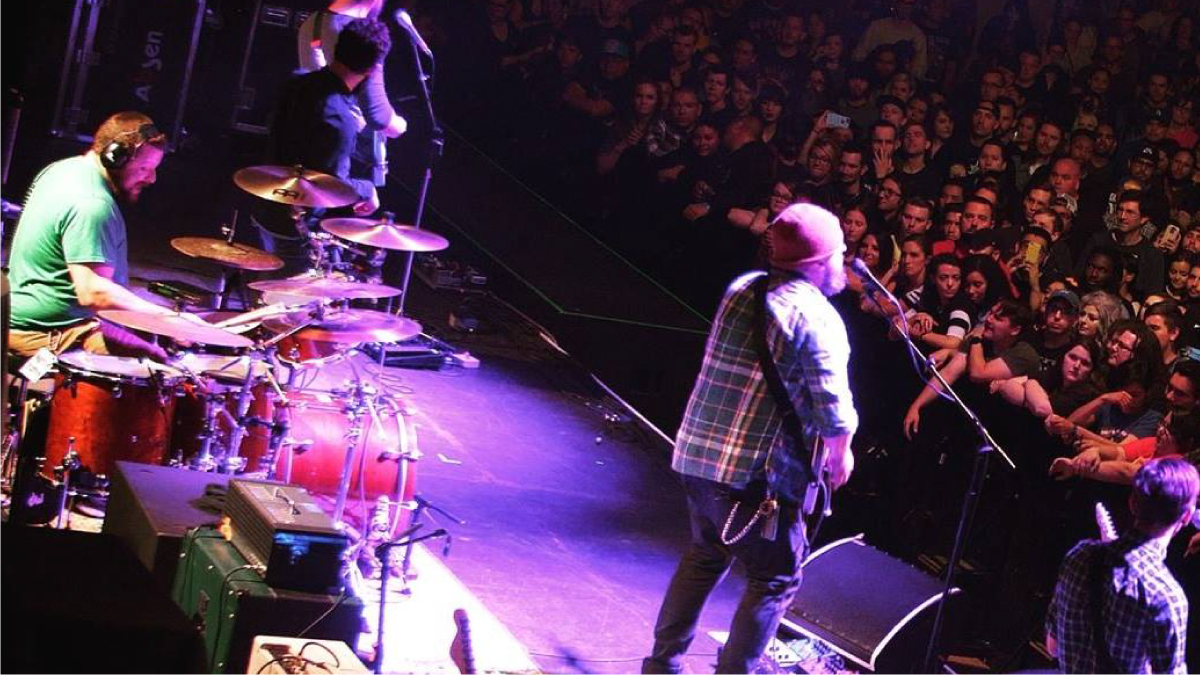 The Dear Hunter started as a solo side project by singer and keyboardist Casey Crescenzo, evolving within a decade to become an expansive indie prog endeavor that captured a deeply devoted fan base with a sprawling album mythology. The first installment of that story arrived in 2006 as Act I: The Lake South, the River North. Subsequent albums created a vast cast of characters and an intricate plot that evolved alongside Crescenzo‘s developing craft and songwriting skills. By the 2010s, the project neared its proposed sixth-volume conclusion with Act IV: Rebirth in Reprise (2015) and Act V: Hymns with the Devil in Confessional (2016), catalog highlights that showcased Crescenzo‘s knack for storytelling and the ability to seamlessly merge earnest indie rock anthems with orchestral flourish that rivaled seasoned composers of film scores. Scattered amongst the Acts, the Dear Hunter also issued releases such as 2011’s The Color Spectrum, 2013’s Migrant, and 2022’s Antimai.

Formerly a member of Belchertown, Massachusetts emo act the Receiving End of Sirens, Crescenzo created the Dear Hunter as an outlet for songs that didn’t fit the other band’s heavy post-hardcore vibe. In fact, it was initially envisioned as a concurrent project: Crescenzo‘s first gig as the Dear Hunter was an opening slot for the Receiving End of Sirens, at which he was backed by the other members of the band. Shortly afterward, however, he decided to leave the group and focus full-time on the Dear Hunter. Following a self-released EP taster called Dear Ms. Leading, Crescenzo wrote and recorded the full-length concept album Act I: The Lake South, The River North, which starts with the story of a young boy’s birth at the dawn of the 20th century and his relationship with his mother. This was the first of a planned six-act project about the eponymous protagonist’s tragic life, his loves, and death. The album matches the exceedingly sensitive lyrics with prog-influenced chamber pop arrangements played almost entirely by Crescenzo, with a few family members and friends helping out on drums, keyboards, trumpet, and harmony vocals.

For touring purposes, Crescenzo put together a full-band version of the Dear Hunter with guitarist Erick Serna, additional keyboardist Luke Dent, and drummer Sam Dent. The lineup was used to record an even more dynamic and symphonic second album in 2007 titled Act II: The Meaning Of, And All Things Regarding Ms. Leading, which chronicled the death of the Dear Hunter’s mother and his subsequent search for love at the brothel where she was employed.

In 2009, the band — which featured a revamped lineup that added Nate Patterson, Andy Wildrick, and Nick Crescenzo — released the third installment of the series, Act III: Life and Death (a dramatic arc that brought him to the frontlines of World War I — mustard gas and all — where he found both his father and half-brother on the battlefield). Crescenzo took a break from the narrative in 2011 with the release of The Color Spectrum, a nine-EP, three-hour concept based on the colors of the rainbow and black and white.

In 2013, the band further delayed the Dear Hunter’s return with another LP, Migrant, and continued a steady schedule of live shows, which also featured a string quartet (these shows were recorded for a surprise release of The Dear Hunter Live album in early 2015, which Crescenzo stated was a “thank you” for the band’s dedicated fan base). Before the release of Act IV in 2015, Crescenzo composed his debut symphony, Amour & Attrition, which was influenced by Debussyand Gershwin and thematically focused on a male protagonist and his journey through a cast of lovers.

In September 2015, the group released Act IV: Rebirth in Reprise. Mirroring Crescenzo‘s own place in life at that time, Act IV continued the Dear Hunter’s saga, focusing on the protagonist’s return to familiar places where he picked up the pieces as a different person. A year later, Act V: Hymns with the Devil in Confessional arrived. The penultimate installment in the series was recorded at the same time as Act IV, lending a familiar tone to the album, which focused on the protagonist’s regression into vice and sin before an ultimate rebirth that had been hinted at as early as Act II. The band hit the road in support of the record, teasingly dubbing it “The Final Act Tour.”

In 2017, the Acts were briefly put on hold with the release of All Is as All Should Be. A box set of the five released Acts was issued on vinyl at the close of 2019, notable for the inclusion of a bonus album titled The Fox & the Hunt, a sprawling orchestral suite that reinterpreted selections from Act IV and V with the help of Brian Adam McCune‘s the Awesome Orchestra.

After Crescenzo made his solo debut with 2020’s Honorary Astronaut EP, he resumed work with the Dear Hunter for the soundtrack to a short film, 2021’s The Indigo Child. The band’s next full-length, Antimai, arrived in 2022. ~ Neil Z. Yeung, Rovi